New street closures and pedestrian restrictions were put in place on the Atlanta Campus Feb. 19 as construction work to rebuild the Courtland Street bridge continues on North and South Collins Street.

C.W. Matthews Construction Co., contracted by the Georgia Department of Transportation to rebuild the decaying bridge, has been working on the section of Collins Street that runs below
the Courtland Street bridge from Sparks Hall to the southern entrance to G Deck since Feb. 5. The new restrictions will include the closing of South Collins Street (Decatur Street intersection south to the MARTA/railroad tracks) to pedestrian traffic until October 2018 and the closing of half of South Collins Street to vehicular traffic.

“Georgia State’s community safety has been foremost in the planning and scheduling all work related to the Courtland Bridge reconstruction project,” said Russ Seagren, the university’s director of facilities planning. “C.W. Matthews is working closely with the university to ensure this priority is adequately addressed. Our second priority has been to assure we maintain access to our buildings and decks with minimal interruptions and closures wherever possible.”

When half of South Collins Street is closed to vehicular traffic on Feb. 19, vehicles will be allowed to use the remaining half of the street to access and exit G-Deck until a full closure of the street occurs at the end of March, Seagren said. Customers may also have a reversible entrance/exit at Lower Wall Street to aid traffic flow. The entrance to G-Deck at Courtland Street will be open until late April. At that time, an additional exit will be available at the Central Avenue exit to assist with exiting the deck.

The Courtland Street bridge construction will take place in multiple phases until October 2018. The bridge will be closed to vehicular and pedestrian traffic from May – October 2018. Click here to view the schedule and impact of work.

Georgia State switches from ADP to OneUSG Connect on March 25. The new system provides the university a single system for human resources, time and absence. Learn more by viewing the Employee Self Service training videos at http://hr.gsu.edu/oneusg/. 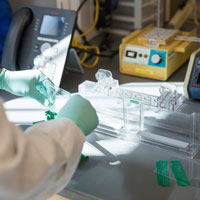 It is the fourth consecutive year the university has climbed in the ranking of more than 900 research institutions. Georgia State is the top-ranked institution without an engineering or medical school in the new report, which reflects fiscal year 2016.

Since 2010 Georgia State has moved 35 spots in the HERD rankings and has doubled its research expenditures, which have risen from $81 million to more than $161 million. The university is in the top 15 percent of research institutions. Georgia State also ranks 96th for doctorates earned.

“We know that the translational research conducted at engineering and medical schools is what attracts the majority of funding dollars from agencies like the National Institutes of Health,” said Dr. James Weyhenmeyer, vice president for research and economic development. “Our ranking reflects the hard work of our outstanding research faculty and the strength we have built in scientific discovery work. It’s yet more proof of Georgia State’s respected standing as one of the nation’s top research institutions.” 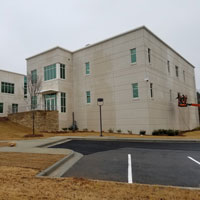 Alpharetta Science Lab Building Officially Opens Feb. 28
The Alpharetta Science lab building opened for students Jan. 8. An official opening for college and the community is planned for Wednesday, Feb. 28. The two-level facility provides the campus four new science instructional labs with shared preparation rooms. It also includes two faculty offices, study areas and restrooms. The building is connected to the existing Alpharetta campus building by a covered walkway. The $6.3 million project was funded by the University System of Georgia Board of Regents. 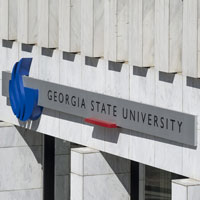 Third Round of Next Generation Program Research Areas Selected

Interdisciplinary research proposals for the third year of the Next Generation Program, part of the university’s plan to build its prominence in innovative research and scholarship, have been selected, Risa Palm, senior vice president and provost, has announced.

The Next Generation Program, successor to the highly successful Second Century Initiative (2CI), is aimed at attracting outstanding new faculty members to tackle the challenges of the 21st century, challenges that cannot be solved by one academic area alone.

The research and scholarship areas selected for the third round of the program align with the university’s goals in its 2011 strategic plan. The plan includes the support of a research culture aimed at tackling large and complex problems, a culture that has grown significantly since the beginning of the plan’s implementation and the start of 2CI, bringing top-notch faculty, innovative research and record external research funding.

“The Next Generation Program continues Georgia State’s growth in excellence and prominence of its innovative research and scholarship,” Palm said. “The selected proposals will further strengthen national and international recognition of Georgia State as a leading research university exploring important fields through collaboration across academic disciplines.”

Sarah Lathrop (J.D. ’13), assistant director of admissions at the College of Law, has received the 2017 Marjorie L. Girth Staff Achievement Award, given annually in recognition of Law staff members who have given exceptional service to the college, the university or the public or who have achieved important professional development goals.

Lyndsy Greene, associate director of After-School All-Stars Atlanta, has been recognized as an “Afterschool Community Champion” by the Georgia Statewide Afterschool Network. Greene will be a part of the network’s inaugural cohort.

Pamela C. Brannon, coordinator of faculty services in the College of Law, has been appointed to the Technical Advisory Committee for LawArXiv, an open access repository dedicated to legal scholarship.
Chip Zimmerman, director of clinical education and assistant clinical professor in respiratory therapy, has been named the Georgia State nominee for the Governor’s Teaching Fellowship.

Susan Swars Auslander, associate professor of early childhood and elementary education, has been recognized by School Science and Mathematics for authoring one of the journal’s top 10 most downloaded papers, generating immediate impact and raising the visibility of the publication. The article is titled “Transitioning to the Common Core State Standards for Mathematics: A Mixed Methods Study of Elementary Teachers’ Experiences and Perspectives.”

Brian Williams, clinical professor of early childhood and elementary education and director of the Alonzo A. Crim Center for Urban Educational Excellence, participated in the Southern Education Foundation’s national campaign “150 Voices.” The project, in collaboration with StoryCorps, is a collection of stories about people’s experience with public education.

Stephanie Behm Cross, assistant professor in middle level education, has received an $8 million grant from the U.S. Department of Education’s Office of Innovation and Improvement. The grant will allow Cross to expand and research the Collaboration and Reflection to Enhance Atlanta Teacher Effectiveness program – initially funded by a 2015 U.S. Department of Education Investing in Innovation grant – to recruit, prepare and support new and veteran teachers in high-needs schools.

Beth Cianfrone, associate professor of kinesiology and heath, and Tim Kellison, assistant professor of kinesiology and health, were part of a group of Georgia State students and faculty who were the official Green Ambassadors for the College Football Playoff national championship at Mercedes-Benz Stadium. Green Ambassadors provided fans with helpful information and stadium directions, helped fans recycle and completed other “green” tasks.

Charity Scott, the Catherine C. Henson Professor of Law, has received the Section on Law, Medicine and Health Care Award for excellence in legal education from the Association of American Law Schools. The award recognizes outstanding contributions of law teachers in health law community service.

The Alumni Association has named the honorees in its first class of distinguished alumni under the age of 40. The 40 Under 40 program recognizes and honors the most influential and innovative graduates who embody the values of Georgia State.

The WomenLead program has received a $200,000 grant from The Commerce Club Foundation to expand and formalize its Atlanta Civic Leadership Initiative, a program that connects students with influential civic leaders for educational and mentorship opportunities

Charlotte Alexander, associate professor of legal studies, has received the Hoeber Memorial Award for Outstanding Article Published in 2017 from the American Business Law Journal.
Lucia Smeal, clinical assistant professor of accountancy, spoke to 150 BrandBank bankers and their clients, and Frazier & Deeter CPAs on the new tax law on Jan. 30. The presentation was called “New Tax Law a Game Changer for Taxpayers. What you Need to Know.”

Cathy Yang Liu, associate professor of public policy, has been named president of the China-America Association for Public Affairs for its 2018-2019 term.

Monica Weatherly, associate professor of English, had a poem titled “Black Boys Are Jazz” appear in the autumn/winter issue of Auburn Avenue. The biannual publication showcases the intellectual and creative voices of people of color and is inspired by the cultural significance of the landmark street in the Sweet Auburn and Old Fourth Ward neighborhoods of Atlanta.

Deborah Manson was installed as president and Carissa Gray as secretary of the Georgia Association of Developmental Education during the organization’s conference in St. Simons, Ga., Feb. 6-9. Both are associate professors of English on the Newton Campus.

V. Kumar, Regents’ Professor and executive director of the Center for Excellence in Brand & Customer Management., was honored by the Georgia House of Representatives recently with an Invitation Resolution. HR 1026, sponsored by Rep. Ed Setzler and cosponsored by Rep. Jan Jones (MBA ’82), Rep. David Dreyer, Rep. Earl Ehrhart and Rep. Rick Jasperse, commended Kumar for his achievements in marketing. Kuman also spoke to the Georgia Science and Technology Committee, which is chaired by Setzler, about marketing innovation, knowledge creation and thought leadership created through the center.

Jeffrey Young, senior lecturer of history, has been selected as the recipient of the 2018 Felton Jenkins Jr. Hall of Fame Faculty Award for R1 and Comprehensives for the University System of Georgia. He will be recognized at the annual Regents’ Scholarship Gala at the St. Regis Hotel on March 2.

Jill Frank, photography lecturer, presented a solo exhibition, “Jill Frank: everyone who woke up at the yellow house” at Institute 193 in Lexington, Ky. Frank’s photographs preserve spaces, situations and bodies in transition.

Lauren Peterson, visiting lecturer of art and design, opened at Plough Gallery in Tifton, Ga., with a new exhibition, “Mouth Water in Elbow Grease.” The exhibition was featured on the front page of the Tifton Gazette.

Iris Feinberg, associate director of the Adult Literacy Research Center, was a guest on WCLK 91.9 FM’s “Your Health Connection,” a production of Clark Atlanta University’s Center for Cancer Research and Therapeutic Development, on Jan. 24. She discussed health literacy.

Jiha Moon, instructor of art and design, was the featured solo artist for Artadia at the NADA Art Fair during Miami Art Basel Week. Her ceramics were also included at the Mindy Solomon booth at the Pulse Art Fair nearby. Moon’s practice centers on her interests and concerns regarding cultural misunderstanding, racial perception, and cultural appropriation and appreciation.

Philip Lewis, professor of film, media and theatre, and his crew from the 2016 Budapest Study Abroad trip attended the U.S. premiere of their feature film production, “Petra,” at the Plaza Theatre in December. Petra is the School of Film, Media and Theatre’s first student-produced feature film.

Jennifer Barker, associate professor of film, media and theatre, is spending the spring semester in Berlin on a research fellowship with the Cinepoetics Center for Advanced Film Study at Freie University, Berlin. The fellowship engages with modes of cinematic synesthesia.

Patrick Freer, professor of music education, travelled to Bogota, Colombia for a conductor residency with the Orquesta Filarmónica de Bogotá. The residency incorporated Freer’s research area of working with adolescent boys and their changing voices.

Stuart Gerber, professor of percussion, performed with synthesist Marc Fleury in the final concert of the Creative Music in Hapeville music series.

Amy Reid has accepted a program manager position in the Office of the Dean in the College of the Arts. She was formerly program manager of Community Music Programs in the School of Music.