Construction continues to move forward on the final phase of the Classroom South addition at the intersection of Decatur Street and Central Avenue.

The four-story structure will help the university meet the demand for more science teaching labs on the downtown campus. The structure, which will connect the original building and the first phase addition, is scheduled for completion by March 2018.

“In addition to classrooms and science teaching labs, the new expansion will include an entrance lobby with student lounge space, elevators and restrooms,” said Ramesh Vakamudi, associate vice president of facilities management. “The design intent is to achieve an elegant facility which is sensitive to its site context using brick masonry, glass and hard stucco.”

The ground story will consist of a large tiered lecture room with 125 seats. The remaining three floors will include four science teaching labs on each floor. Each of the 12 labs will have a seating capacity of 24 stations with lab support space.

“With the increase in chemistry and biology majors in recent years at Georgia State there has been a substantial demand for courses related to these academic areas along with the need for science teaching labs,” Vakamudi said. “Additional teaching lab capacity is also required to compensate for the loss of existing teaching labs in Kell Hall, which is slated for demolition as part of campus master plan implementation.” 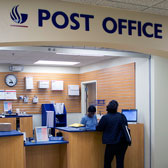 PawPrints And Post Office Moving
PawPrints and the Post Office are moving from Kell Hall to newly renovated spaces adjacent to Hurt Park on the street level of the T Deck Parking Deck. The move will take place during this summer with no interruption in service. For more information about PawPrints printing services, visit pawprints.gsu.edu. 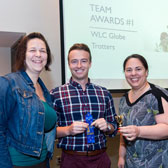 Nearly 850 employees were recognized at the HealthTrails Celebration May 17 for participating in a six-week health challenge that ended April 30.

During the challenge, faculty and staff tracked their steps taken, water consumption and acts of kindness. A new summer challenge will begin June 19.

“I decided to join this unique challenge so that I could meet new people and set personal health goals,” said Noey Watson, a student financial management specialist who climbed Stone Mountain for the first time. “It was a fun way to compete with friends and stay motivated at the same time.”

Cheryl Johnson Ransaw, director of Employee Development and Wellness Services (EDWS), said the challenge was a great opportunity for Georgia State to support the first University System of Georgia (USG) sponsored system-wide well-being initiative and align with the USG’s vision to build and sustain a culture and environment of health and well-being.

This wellness initiative represents the largest number of employee participants in the history of Georgia State’s journey to wellness, Ransaw said.

Tony Price, EDWS health and wellness coordinator, said the HealthTrails Challenge helped employees become more mindful of their physical activity, hydration and their behavior towards those around them. Three hundred and fifteen Georgia State employees took advantage of the USG incentive to receive a Fitbit subsidy to participate in the challenge.

“The effects are far reaching and will have a lasting impact,” Price said.

HealthTrails will be back this summer with a few minor changes: 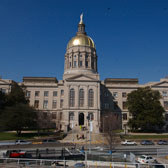 The budget will increase state spending by $1.25 billion over the fiscal 2017 budget adopted last spring.  Much of the new money was added in transportation projects, education funding and two percent merit-based pay raises for teachers and state employees.  The budget recommendations specific to the University System of Georgia (USG) and Georgia State included $5 million in funds for the demolition of Kell Hall/Library Plaza, $600,000 for equipment for the Alpharetta Labs and Learning Center and $142 million for new USG formula funds. These funds are critical in meeting enrollment demands, providing for maintenance of new facilities and funding strategic initiatives.  Also included was $50 million in bonds for major repairs and renovation and a three percent increase for HOPE scholarships. 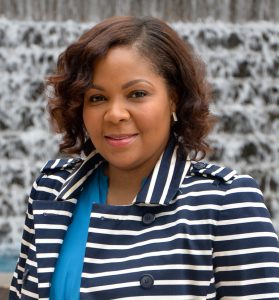 Fran Mohr, director of administrative and customer services at Perimeter College, has been selected as Staff Council Member of the Year 2016-17. Mohr was staff relations director and the district representative for Perimeter College.

Sandra Dwyer, principal senior lecturer in philosophy, has been awarded The Center for Excellence in Teaching and Learning’s Graduate Student Pedagogical Mentorship Award.

Marlena Salters, instructor in business and social sciences, has been awarded The Center for Excellence in Teaching and Learning’s Part-Time Instructor Pedagogy Award.

Michael Shea, Willard N. Timm Jr., Daniel J. Whitaker and Rhonda Williams have been recognized with George M. Sparks awards for exemplifying “a willingness to go the extra mile with good humor and perseverance.” These were the characteristics of one of the university’s most highly regarded presidents, Dr. George McIntosh Sparks, who served from 1928 to 1957.

Brian Williams, clinical associate professor of early childhood education, was a recipient of the Carl V. Patton President’s Awards for Community Service and Social Action. Williams won the Outstanding Faculty or Staff Member Award, which is awarded to a Georgia State faculty or staff member who has dedicated his or her time to addressing a social issue.

The Department of Kinesiology and Health has been awarded the Carl V. Patton President’s Awards for Community Service and Social Action. The department was awarded the Outstanding University Program Award, which acknowledges the efforts of campus programs that are created to serve community needs.

Four faculty members were named Distinguished University Professors at the event: Andrew Gewirtz of the Institute for Biomedical Sciences, John Horgan of the Global Studies Institute and Psychology, Bala Ramesh of Computer Information Systems and Monica Swahn of Epidemiology and Biostatistics. Georgia State began naming Distinguished University Professors in 2013 to recognize professors who have records of exemplary scholarship in their fields of study, and whose research and teaching demonstrate a commitment to sustained high levels of academic achievement.

Four professors were named Regents Professors at the Celebrating Faculty Excellence event on May 15: Richard Baskerville of Computer Information Systems, Paul Lombardo of Law, Rose Sevcik of Psychology and Jenny Yang of Chemistry.

Kathleen Baggett, associate professor of health promotion and behavior, has been recognized by Early Childhood Research Quarterly for the number of citations of a paper she co-authored, “Effects of Joint Attention Mediated Learning for toddlers with autism spectrum disorders: An initial randomized controlled study.” The paper, published in 2013, is one of the most highly cited papers during 2014, 2015 and up until June 2016, according to the journal’s editors. Baggett has also been invited by the International Division for Early Childhood to assist in crafting the division’s statement on early childhood challenging behavior.

Chara Bohan, professor of middle and secondary education, has been appointed editor of Curriculum and Teaching Dialogue, the American Association for Teaching and Curriculum’s flagship journal.

Shanta Dube, associate professor of epidemiology & biostatistics, was the lead author on an article titled “Utilizing the salutogenic paradigm to investigate well-being among adult survivors of childhood sexual abuse and other adversities” for the journal Child Abuse & Neglect.

Fayron Epps, assistant professor of nursing, has been elected to the National Hartford Center of Gerontological Nursing Excellence Board of Directors and Executive Committee as Legacy Director.

Brad Farrell, assistant professor of physical therapy, is the recipient of the 2017 Lewis Foundation Research Award.

Sue Kasun, assistant professor of middle and secondary education, is the recipient of the William Elgin Wickenden Award, which recognizes the author(s) of the best paper published in the Journal of Engineering Education, the scholarly research journal for the American Society for Engineering Education.

Natalie King, assistant professor of middle and secondary education, has been named a recipient of a 2017 Jhumki Basu Scholar Award, given annually by the National Association for Research in Science Teaching to support and nurture promising young science education scholars from underrepresented groups.

John King, a math instructor, was selected as a Governor’s Teaching Fellow for the Summer Symposium at the University of Georgia.

Kendall Kerew, assistant clinical professor and director of the Externship Program, has been elected to the Clinical Legal Education Association’s Board of Directors, and helped introduce LexternWeb, a website to assist law schools in creating and maintaining externship programs like the one at the College of Law.

Julian Juergensmeyer, Ben F. Johnson Jr. Chair in Law and director of the Center for the Comparative Study of Metropolitan Growth, has been appointed to the Atlanta Regional Commission’s Global Advisory Panel.

Timothy D. Lytton, Distinguished University Professor and professor of law, has been elected to the board of the Section on Torts and Compensation Systems of the Association of American Law Schools.

Kinsuk Maitra, chair of occupational therapy, has received the 2017 Meritorious Service Award presented by the American Occupational Therapy Foundation Board of Trustees.

Karen Minyard, director of the Georgia Health Policy Center and research professor of public management and policy, was asked to serve on the advisory council for the interactive online Doctor of Nursing Practice Nurse Executive Program offered through Augusta University’s College of Nursing. The new program will enable participants to gain proficiency in leadership, relationship management and analytical thinking.

Lee Rivers Mobley, associate professor of health management and policy, was the lead author on an article titled “Medicare modernization and diffusion of endoscopy in FFS medicare” in the Health Economics Review.

Kristina L. Niedringhaus, associate dean for library and information services and associate professor of law, has been elected vice-president/president-elect of the Southeastern Chapter of the American Association of Law Libraries.

Mary Radford, professor of law, has been appointed to the Faculty Development Committee of National Academy of Elder Law Attorneys.

Visiting Lecturer in Ceramics John Roberts has been selected to be in the 2nd National Juried and Invitational Cup Exhibition at the Hudgens Center, May 16 – July 29.

Anna Schachner released her first novel, “You and I and Someone Else,” on April 4, published by Mercer University Press. Schachner is the editor of Perimeter College’s national literary journal, The Chattahoochee Review, and an associate professor of English on the Dunwoody Campus.

Claire Adams Spears, assistant professor of health promotion and behavior, was the lead author on an article titled “Perceptions of Mindfulness in a Low-Income, Primarily African American Treatment-Seeking Sample” in the journal Mindfulness.

Kymberle L. Sterling, associate professor of health promotion and behavior, has been awarded a $100,000, two-year grant by the Prevent Cancer Foundation. The grant, titled “The Little Cigar and Cigarillo PhotoVoice Feasibility Project,” is designed to identify the environmental factors that lead African-American youth to use the products.

Margaret H. Vath, senior lecturer of law, has been elected president of the Atlanta Bar Association.

John Weber, assistant professor of mathematics, has received the National Institute for Staff and Organizational Development award for teaching excellence.

Daniel Whitaker, professor of health promotion and behavior, has been asked to serve on the Board of Scientific Counselors for the National Center for Injury Prevention and Control of the Centers for Disease Control and Prevention, for a term that will extend through August 2020.

Robert Woodrum, assistant professor of history and political science, wrote the chapter, “Race, Unionism, and the Open-Shop Movement along the Waterfront in Mobile, Alabama,” in the book, “Against Labor: How U.S. Employees Organized to Defeat Union Activism,” published by the University of Illinois Press.